Archive for the ‘Uncategorized’ Category

1. a stingless male bee (as of the honeybee) that has the role of mating with the queen and does not gather nectar or pollen
2. one that lives on the labors of others : parasite

1. A male bee in a colony of social bees, whose sole function is to mate with the queen
2. (Brit) a person who lives off the work of others
3. a pilotless radio-controlled aircraft

The 21st century has seen many advancements, cell phones, ipads, smart cars, driverless cars and now drones. Not the platforms used by the CIA or the military, but commercially bought “toys”.

These systems have flooded the market, airspace and privacy. How much harm can these toys really cause?

For starters, the FAA, military and industry as a whole currently have no policies or procedures in place to combat these intrusive pest.

[On January 26, 2015, Just after 3 a.m. Monday, a drone flew low altitude over the south grounds of the White House without setting off alarms and was spotted by a Secret Service officer standing guard.

The “quadcopter” device, approximately two feet in diameter, then crashed on the southeast corner of the property, prompting a lockdown at the complex until the device was examined and determined not to pose a danger. Officers and agents with flashlights scoured the complex and surrounding area for clues. A man called authorities roughly six hours later to report that he was a recreational operator and had mistakenly crashed the drone. He said he did not mean to fly it onto the White House grounds, according to the Secret Service. Most recreational drones, like the one that crashed Monday, weigh only a few pounds and lack the power to do much harm. But Department of Homeland Security and Secret Service officials have studied the potential that these devices, which can be purchased cheaply and easily, could be modified to carry explosives or weaponry.

Larger models that can carry payloads of up to 30 pounds are available on the market and are expected to become more common.] 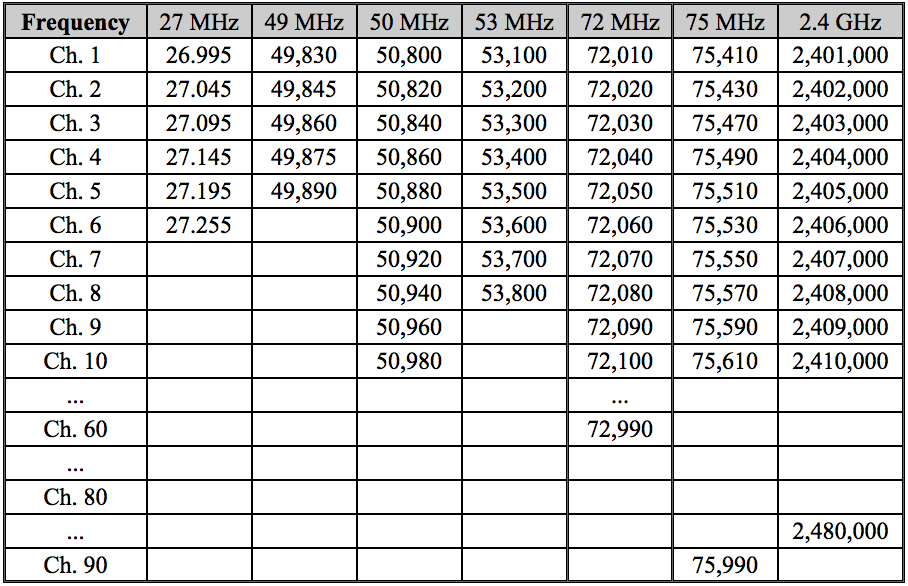 Initially, radio-controlled cars, helicopters, planes, and toys, for the most part, used either 27 MHz or 49 MHz frequencies. The FCC granted these frequencies for basic consumer items, such as toys, garage door openers, walkie-talkies, and more. Higher frequencies of 50 and 53 MHz can be used if the operator is a licensed Ham Radio Operator with greater allowed output power levels. Additionally, the 72 MHz and 75 MHz bands can be used for more advanced communications links with additional channels (Table 1).

Different countries and regions of the world allow different frequencies and power levels1 and determine which are off limits. The military can use any power level in any band they want during crisis situations. The transmitter output power is sometimes dictated in watts, but is more accurately represented by effective radiated power measurements 2.

Modulation techniques can determine interoperability. For example, in the 27 MHz and 49 MHz bands, only one 27 MHz unit can be operated in close proximity to another. The same with 49 MHz. Cross-talk causes interference on each unit.

Drone and quadcopter operate in the 2.4 GHz and 5.8GHz.

2.4 GHZ – is the radio frequency that most quadcopters use for the connection between the ground transmitter and the aerial vehicle. This is also the frequency that computer wireless networks operate on.

Another concern is the quadcopter interfering with its own on-board systems. This is due to two separate systems being on many modern quadcopters – one for control of the craft and one for transmitting the video.

5.8GHZ is another radio frequency used in quadcopters; to avoid two frequencies on the same “band” (in the same realm which may entangle each other). The most common frequencies used for video transmission are: 900 MHz, 1.2 GHz, 2.4 GHz, and 5.8 GHz. The use of directional, high-gain antennas increases video range. Sophisticated setups are capable of achieving a range of numerous miles. 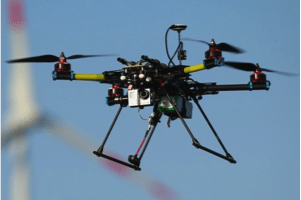 A drone dropped a package of drugs into a prison yard while inmates were outside, sparking a fight, prison officials said.

The package was dropped July 29 at the Mansfield Correctional Institution, about 65 miles southwest of Cleveland. It contained almost a quarter of an ounce of heroin, over 2 ounces of marijuana and more than 5 ounces of tobacco. An investigation determined the drone dropped a package intended for an inmate on the north recreation yard, and it was then thrown over a fence to the south recreation yard.

The FAA has proposed its biggest fine ever — $1.9 million — to be levied against aerial photography company SkyPan International for illegal drone flights in the busy airspace above New York and Chicago. The FAA says that SkyPan conducted 65 unauthorized drone flights over urban areas between March 21st, 2012 and December 15th, 2014. The drones involved allegedly lacked a two-way radio, transponder, altitude-reporting equipment, airworthiness certificates and effective registration, while SkyPan itself failed to get a valid Certificate of Waiver or Authorization for the flights.

The FAA says that of the 65 flights, 43 of those flights reportedly took place in New York’s tightly restricted Class B airspace, and took off without receiving air traffic control clearance to do so. The company now has 30 days to respond to the FAA.

What is the Solution?

There is a theoretical concept of placing a low frequency emission 25-50 ft out and up around the perimeter of the facility. In this approach, neither internal nor external systems will be compromised except for those that modulate and operate within the controlled space and frequency of the facility.

The concept taken from the abstract: “Artificial neural networks can perform reliable classification of ground vehicles based solely on there acoustic signatures, if robust features can be identified.”

If we take the concept into the 21st century and redefine the algorithms to distinguish between natural creatures of the air, background noise and drones, perimeter detection, control and mitigation greatly favor the requirements of those responsible for force protection and deterrence.